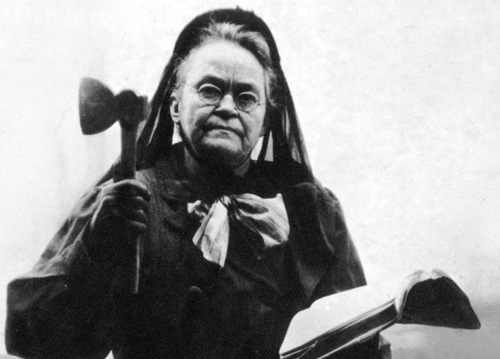 Booze is great. And if you don’t think so, you’re just anti-American. The Founding Fathers wanted us to be free. Free to drink alcohol, for one. Only a couple of decades after seriously kicking some British ass, George Washington was operating the largest whiskey distillery in the United States. Thomas Jefferson regularly brewed beer, and stocked the White House with wine when he was President. John Hancock ran a liquor distributing company. Lincoln was a bartender, and owned his own tavern. The list of patriotic, booze-loving American heros goes on and on. Because freedom, that’s why.

But it never takes tyrants long to ruin a good thing. In the early 19th century, “temperance” movements began to pop up across the United States. Who supported them? Mostly religious fanatics and racists. The Klan were big supporters. They associated crime with those dirty liquored-up immigrants. Carrie Nation was also a leader in the movement. Since her husband was a drunkard, she reasoned that no one should ever be allowed to drink. Besides, God told her so. Her typical routine was to enter private bars, singing spirituals and praying, and then she’d bust the joints up with a hatchet. With a fucking hatchet! Why does it seem that the people who “speak with God” tend to be both crazy and violent. All I know, is if some lunatic came into my bar swinging a hatchet, the bouncers would deal with that situation in short order. Bye-bye, Carrie.

Sadly, bar owners allowed this psychopath to continue largely unchallenged, until the 18th Ammendment was eventually ratified. Prohibition was the law of the land from 1920 until 1933. If this futile experiment taught us anything, it’s that anti-freedom legislation is always a bad idea. Enjoying alcohol is not immoral, but turning previously law abiding citizens into criminals with the stroke of a pen definitely is. Whenever tyrannical laws are enacted, they always result in unintended consequences. Prohibition cost America thousands of jobs, and much needed tax revenue as we entered the Great Depression. But even worse, instead of stopping crime as supporters claimed it would, prohibition ushered in a new era of far reaching, well-armed criminal syndicates. Violent crime increased to levels never seen in our country’s history. So thanks for the Mafia, Carrie Nation, you deranged maniac.

Prior to the law taking effect, many wealthy Americans simply stockpiled alcohol, buying up the inventories of liquor retailers and wholesalers who were forced out of business by government decree. President Woodrow Wilson moved his own personal supply of booze from the White House to his home when his term was over. His successor, Warren G. Harding, transferred his large personal stash into the White House following his inauguration. Before the congressional elections of 1930, bootlegger George Cassiday reported how he had been providing hooch to members of congress since the very beginning of Prohibition. By his estimate, 80% of congressmen and senators were embibing. As always, if you were well connected you could simply skirt the law. The brunt of the negative impact of this legislation was suffered primarily by the working-class poor. Sound familiar?