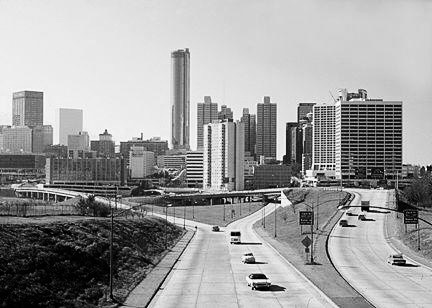 In 1997, when we decided to relocate The Vortex from West Peachtree to Peachtree Street, people did not hesitate to tell us we were crazy. And maybe we were. After all, the stretch of Peachtree we moved to was pretty sketchy. None of today’s soaring modern condo towers or fancy shops existed. Far from it. The area had more of a post-apocalyptic, urban wasteland feel to it in those days.

For instance, just one block south of our new location, the Atlanta Cabana Hotel had represented the pinnacle of mid-century modern design when it originally opened in 1958. But as people began abandoning the city for the suburbs in the late ‘60s and ‘70s, it fell into disrepair. During one of its final incarnations as a Quality Inn, it was routinely rented out to a variety of unorthodox groups. A girlfriend of mine once had her nipples pierced at a “Sex Toy” convention held there. Well, actually only one nipple. She couldn’t take the pain. Anyway, by the time we had moved to the neighborhood, the hotel had been permanently shuttered, and sat decaying behind a rusty chain link fence.

The soviet-style brick building that we actually moved into was originally built in 1950. It served as offices for the U.S. Department of Agriculture, and later the Georgia Department of Human Resources. The government eventually abandoned the site in the early ‘90s, as the area became increasingly seedy. The building remained boarded-up and blighted until it was acquired by local developer, Jim Borders. His idea was to redevelop the property into apartments with retail spaces on the bottom floor, and open in time for the 1996 Atlanta Olympic Games. I’m sure a lot of people thought he was crazy too.

Directly behind us, Cypress Street literally had a world-wide reputation as the place to pick-up male prostitutes. The scene reminded me of the Native American legend that described a time when a warrior could walk from horizon to horizon on the backs of the buffalo without stepping on the ground. Sure, there were a lot of buffalo on the great plains, but I’m guessing there were actually more hustlers behind The Vortex. In fact, you couldn’t drive your car down the street without nudging them out of the way. If you did manage to squeeze through, these young men would openly display their sizeable packages for your inspection, day or night. They were just remarkably friendly, in a terrifying sort of way.

Directly across the street was a Citco gas station that we lovingly referred to as the “Crack-co,” because drug dealers openly sold crack in the parking lot. Catty-corner was a boarded-up Krystal, and just beyond that was the notorious Backstreet nightclub. Originally opened in 1975, this was one of a handful of Atlanta clubs that operated 24/7. They featured a long-running drag show which was immensely popular with both a gay and straight clientele. This place was actually pretty awesome. I’m not ashamed to admit that I stumbled out of its dark depths into the morning sunshine on more than one occasion. But eight years after we moved in to our new location, the forces of politics and gentrification finally caught up with Backstreet, and it too was replaced with a shiny new condo high-rise.

Sometimes the nostalgic side of me yearns for a $3 pitcher of beer at the Stein Club, the smoky dive bar that served as refuge from the trendy Buckhead bar scene of the day. Or a bowl of seafood etouffee from the little French Quarter Food Shop, served-up by Missy, the diminutive owner with the mouth of a sailor. But sadly, those spots were also demolished to make room for more redevelopment. To some it may seem that The Vortex was part of the first wave of urban-pioneers willing to invest in a questionable part of Atlanta. But in hindsight, what I have come to realize, is that The Vortex is actually one of the last remaining links to the “good ol’ days” of drinking and debauchery in this town. So if anyone wants to join me in a toast to those times, you’ll find me sitting at my bar. Come on in. Everyone is still welcome here.