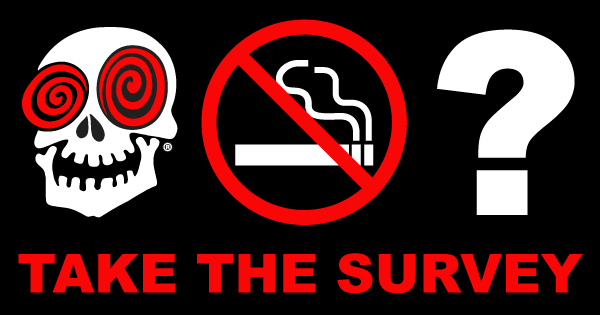 According to the current smoking policy at The Vortex, customers are allowed to smoke cigarettes (or e-cigarettes) when seated at the BAR only. Smoking is not permitted anywhere else on the premises. If you have an opinion on this policy now is the time to let your voice be heard. You can CLICK HERE to complete a seven-question survey on the topic. This survey will remain active throughout the entire month of January. Once we have had ample time to compile and review the results, we will report our findings, and any decisions that we’ve made in a follow-up blog that will be posted here sometime in February. Thanks in advance for sharing your thoughts. And just for the record, below is a brief history of the various smoking policies The Vortex has applied over the years.

When we first opened back in 1992, approximately 27% of adults in the U.S. were smokers according to the CDC. Based on my personal observations, I’d estimate that at least 75% of our patrons smoked at the time because the two levels of our tiny little bar were often so dense with cigarette smoke, you couldn’t see your hand in front of your face. And even the non-smokers would light-up once they got a little hooch into their systems. In those days, there were no smoking ordinances pertaining to bars, and since The Vortex was a secret hideout designed for people who wanted to be a little bit bad, we obviously allowed smoking.

A year or so later, we received a visit from a code enforcement officer. He came in to notify us that the Atlanta City Council had passed an ordinance that required all bars serving food to designate at least 50% of their seating as “Non-Smoking.” Since our bar was so small, we asked him to recommend which seats he thought would magically be protected from smoke by posting a sign. He replied, “It doesn’t make any difference to me, as long as it’s half the seats in here.” Due to the fact that the actual “bar” was located on the first floor, and everyone who sat at the bar smoked in those days, we decided to assign the upstairs loft as our non-smoking area. Sure, all the cigarette smoke would eventually rise up into that space, but we had met our legal obligations. This is a good example of how government attempts at social engineering often work-out in the end.

In 1996 we opened The Vortex in Little 5 Points, and in 1997 we relocated our Midtown venue to a bigger space on Peachtree Street. We continued to comply with the 50% non-smoking mandate in both locations until the state passed the Georgia Smoke-Free Air Act of 2005. That law required restaurants and bars to be 100% non-smoking unless they did not allow minors on their premises. So the government had forced us to make a decision – ban smoking, or ban children. Up until that point, we allowed parents to decide if they wanted to bring their kids to our bar. But since The Vortex was indeed a bar, saying goodbye to the youngsters was not a difficult call for us to make. And while our fans enjoyed the fact that they could still smoke in our bar, they really seemed to appreciate the new “adults-only” environment even more. So for us, the age restriction ended up being the more popular result of that particular legislation.

Nowadays, because of health and lifestyle changes, along with legislation like the Smoke-Free Air Act, smokers seem to have gradually adjusted their habits as to where and when they smoke. Recently, as I was entering The Vortex in midtown during a severe thunderstorm, I happened to notice a woman huddled underneath the umbrella of a patio table, smoking a cigarette. I informed her that she was welcome to smoke at the bar inside and she replied, “Oh, I know. But I don’t want to be a bother to anyone.” This got me thinking. If smokers are now this reluctant to smoke where they are legally permitted to do so, it just might be time to reassess our smoking policy. And now here we are. So help us out. Take the survey.