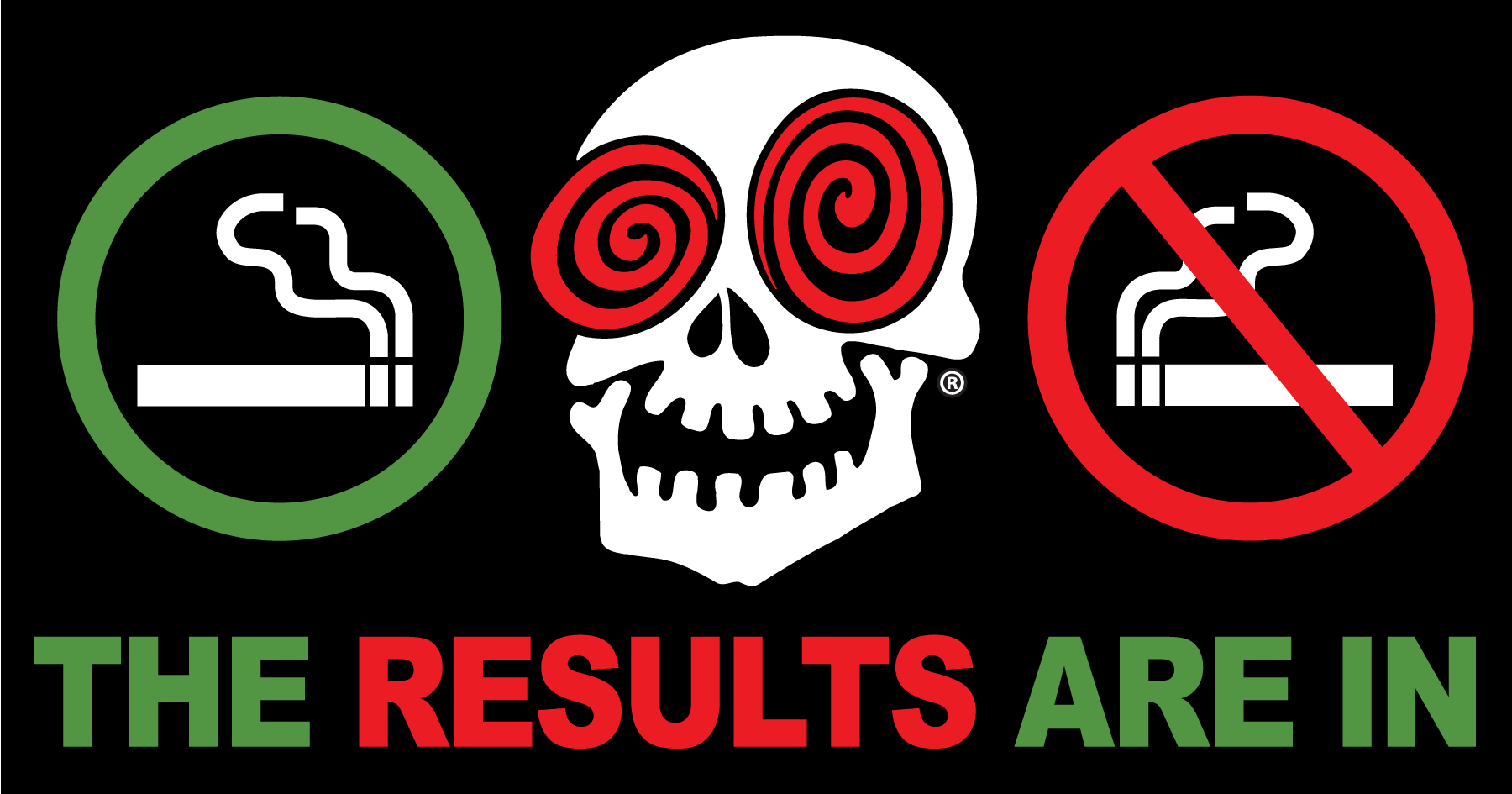 As it says right on the cover of our menu, “Everything we offer is bad for you.” Since 1992, The Vortex has always been the place where you can eat, drink and, yes, smoke to your heart’s content. And many people stand by the old cliché, “If it ain’t broke, don’t fix it.” But the plain truth is, we’ve noticed fewer and fewer of our customers utilizing the option to smoke at our bar. And we’ve also seen a significant decrease in the number of our employees who smoke. A few years back it was 100%. Now, it’s definitely a minority

Times change, and people’s preferences often change right along with them. Since we are in the business of keeping our loyal fans happy, we decided to get their thoughts on our current smoking policy. For the entire month of January 2019, we made an online Smoking Survey available through our website. The response we received was overwhelming. Close to 11,000 people shared their opinions with us. We are truly humbled that so many people care about The Vortex enough to participate in our little survey. This just reinforces the fact that Vortex fans are absolutely the best.

Now let’s get down to the numbers. Of people who took this survey, 60.6% claim to have been patrons of The Vortex for 6 years or more, 20.6% stated they have been patrons for 3-5 years, and 8.3% said they are not currently patrons. So, a large majority of those who took the survey actually do patronize The Vortex on a regular basis. That’s a good start.

What was the breakdown of smokers to non-smokers taking the survey? Well, 54.6% of the respondents said that they have never smoked and another 25.7% said that they used to smoke but no longer do. This means 80% of our patrons are non-smokers. That leaves about 20% of survey-takers who claim that they currently smoke: 10.2% of them are social smokers and 9.5% smoke regularly. According to the CDC (if you believe them), approximately 15% of adults in the U.S. smoke these days. According to our survey, it seems Vortex patrons may smoke slightly more than the average American. Sort of. Maybe. Or maybe not.

The big question of “How does our current smoking policy affect your patronage?” had some of the most dramatic results. A 51.5% majority of survey-takers claim that they do not patronize The Vortex (or patronize less) because smoking is allowed and 38.6% said that our smoking policy does not affect their patronage one way or another (because they love The Vortex so much). That leaves only 9.9% of survey-takers that patronize The Vortex specifically because they can smoke at the bar. That 50% to 10% margin is pretty extreme.

Our fans have spoken, and we have made a decision. Ready? Here it is: Smoking will no longer be allowed anywhere INSIDE our premises. However, since smoking has always been an option at The Vortex, and since a slightly higher than average percentage of our clientele may actually smoke, we will still offer smokers the option to do their thing outdoors.

At The Vortex-Midtown, the smoking of cigarettes (and e-cigarettes) will be allowed when dining outside on our sidewalk patio. At The Vortex-L5P, smoking will be allowed on the open fenced waiting area just outside the bar, known as the “playpen.” The smoking of cigars, pipes, clove cigarettes or anything deemed “illegal” by the evil overlords will continue to be forbidden. These policy changes will all go into affect immediately at both Vortex locations – like, right now, even as you’re reading this – right in the middle of Atlanta’s 2019 Super Bowl celebration.

We believe that this policy change will help satisfy the largest number of patrons possible. I suppose many people will celebrate these decisions, while others may be slightly disappointed. But I hope everyone keeps one thing in perspective. As always, we are doing our best to please our core group of supporters. And this really is only about a smoking policy in a bar. So relax. Everything will be fine. Just take a deep breath – in the newly clean air of The Vortex.